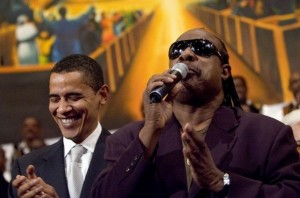 On Feb. 26, PBS will broadcast its series, “Performance at the White House,” a concert where President Barack Obama will present Stevie Wonder with the Library of Congress award, reports the Associated Press.  Wonder’s songs such as “Signed, Sealed, Delivered I’m Yours” and “Higher Ground” were used throughout Obama’s presidential campaign.